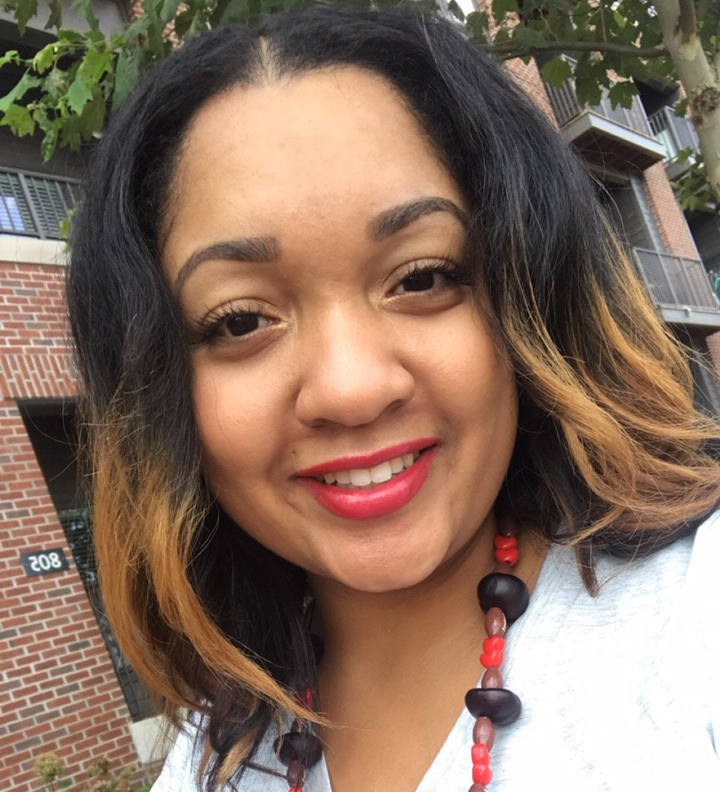 Anyone who encounters the positivity that emanates during an interaction with Skyla Johnson could infer that her outlook stems from having had an easy road to success. And while Skyla, a social worker and owner of Suga Pie's—a licensed home bakery, loves both of her current occupations, she admits that her path was a difficult and complicated one. Fortunately, the obstacles she encountered were conquerable with the help of the Office of Diversity and Inclusion's ACCESS and Young Scholars Programs.

Growing up in Toledo, Ohio, Skyla was notified by her elementary school principal about the Young Scholars Program (YSP), which reaches out to Ohio's largest urban school districts to recruit young students of financial need and prepare them to enter The Ohio State University. Having an older sister who also progressed through the program, Skyla leapt at the chance. “I was already sold on being at Ohio State even before I was inducted as a scholar,” she says. “I fell in love with Buckeye football while being in elementary school, and once I was inducted as a sixth grader, Ohio State was the only college I desired to attend.”

YSP provides its participants with continual advising and culminates in a financial aid package if they remain in good academic standing and gain admittance to the university. This strategic preparation includes career exploration, mentoring, and SAT/ACT classes—to name a few. During her high school days, Skyla took advantage of all of these and also participated in the program's summer academy. During her undergraduate studies, she made use of private tutors and academic advisors as well.

But a year in, her college journey took some unexpected turns. “I entered Ohio State as a pre-business major, but eventually found my passion in The College of Social Work by the start of my sophomore year.” Around this time Skyla gave birth to her son and also received a suggestion from her sister that would ultimately add a new element to her career trajectory. Her sister recommended that Skyla turn her knowledge and love of baking, which she acquired from her great-grandmother (the eponymous “Sugar Pie”), into an actual business. Foreseeing the opportunity to generate extra funds for her three-month-old son while also chasing a personal passion, Skyla judged the idea as a win-win situation. This would become “College Girl Cupcakes.”

“My business definitely kept me motivated, and I used it as an outlet for when my day-to-day became too stressful,” she remembers. “I had a strong support system, and my maternal grandmother moved to Columbus with me at the start of my sophomore year to assist with child care. I am forever grateful for having my family's support along with the support of ACCESS.”

The ACCESS Skyla speaks of is ODI's ACCESS Collaborative Program, which provides support services for single-parent students. This includes options like priority registration for classes, child care, and housing assistance.

“These supports took away some of the burden and allowed me flexibility to raise my son, complete school work, and create new cupcake flavors. There were many of days when I took myself, my son (when I had no child care), and a couple dozen cupcakes to class with me, too.”

And though she recalls this period as a hectic one, during which attaining adequate sleep was a challenge, Skyla was able to stay on the right track. “Despite taking a quarter off when my son was born and starting my business, I still managed to finish all of my courses in a four year track, graduating with my BSSW (Bachelor of Science in Social Work) in May 2013.”

“Your college journey may look different than your fellow scholar, and that's okay.”

Skyla has been a social worker for six years, and she is currently a Case Management Coordinator for a leading health insurance company. She also maintains her business—now called “Suga Pie's” in North Columbus. She's in the process of developing a business plan to grow and expand Suga Pie's, which currently sells cupcakes by the dozen. “My most immediate goal with Suga Pie's is to wholesale my cupcakes and other desserts to other local businesses for resale. I'm excited to see my desserts being offered in the future at restaurants, local grocery stores, markets, and community events.”

But even amidst all her current responsibilities, Skyla still has time to reflect on the opportunities that ODI's YSP and ACCESS programs provide for students. “Being a first generation college student is so important not only within our immediate family, but also within our community so that we can break cycles of poverty, increase diversity across a variety of career fields, and be able to provide our own children with better education and opportunities as they grow. Without programs like YSP, many first generation college students would not have been afforded opportunities and resources to attend large, well-known universities.”

And as for Skyla's advice to young students preparing to enroll in these programs: 1) Appreciate the opportunity. 2) Participate in meetings, training, and special events. 3) Ask for help.

“Do not let your pride get in the way of accomplishing your goals – no matter what that takes. Reach out for help if you're struggling at any point. I promise there is always a solution and a way to improve your circumstance,” she suggests. “Maintain a good balance of work and fun, practice self-care, and enjoy the journey.”