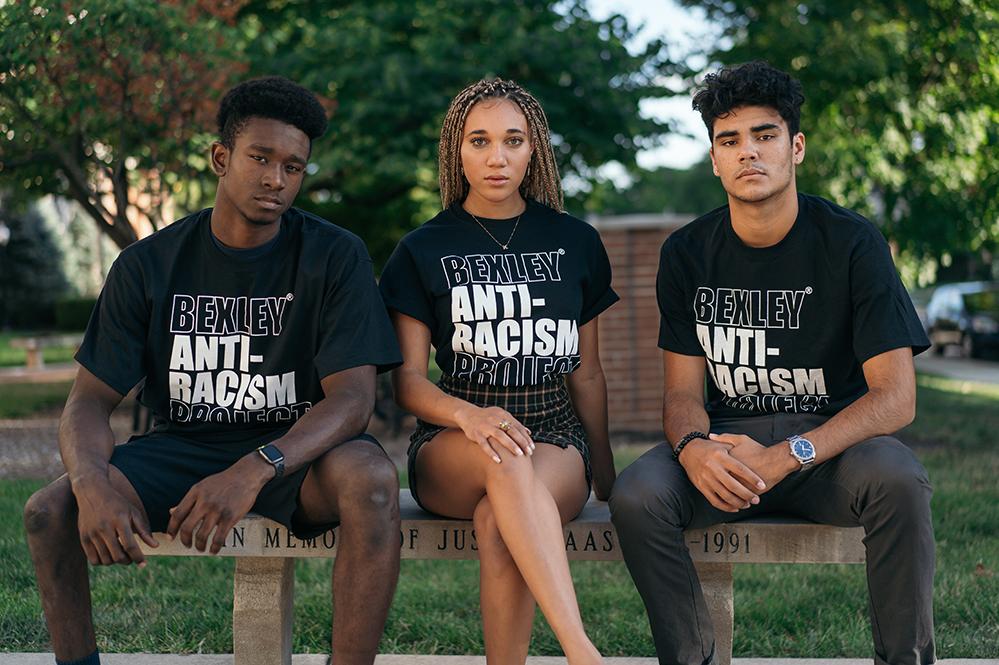 As the movement for social change stemming from the George Floyd protests marches forward, a pair of Morrill Scholar Program students are among those leading the fight for racial justice and greater equity in Bexley.

The duo—second-year MSP Kayah Woodford and incoming first-year Austin Smith—are key members of an anti-racism group aimed at advocacy and education in their leafy suburb on Columbus' east side. A third MSP student, Max Dresbach, a first-year marketing major, has also become involved in the project. (Pictured above: Austin, Kayah, and Max)

A political science major, Woodford drew the attention of group organizers after getting a rousing response on Instagram from a live broadcast she did while speaking during one of the first nights of protests in Columbus. “I realized I have a captive audience and people are really listening to what I'm saying,” she said. “I can really do something here.”

Asked to join the group founded by 2017 Bexley High School graduates, Woodford eagerly accepted and the Bexley Anti-Racism Project (BARP) was off and running.

The group's first event—a four-mile march from Bexley's main drag of Drexel Avenue to the Ohio Statehouse on June 6th—drew more than 1,000 protestors from a community that is only about six percent Black. “It was an energy I've never felt from my community,” Woodford said.

Recently, the group published a list of demands calling for Bexley schools to hire more minority teachers, provide implicit bias training for all staff and to explicitly address racial inequalities in professional development and curriculum.

Reflecting on her experiences in Bexley, Woodford said she questions the distribution of resources and steering of students that left her as one of only a few Black students in Advanced Placement courses taught by the most veteran teachers. Additionally, there was a troubling lack of Black teachers at Bexley High School.

“I went through my entire high school career and didn't have one Black teacher,” she said. “I had no exposure to a positive administrative faculty member.”

Woodford, Smith and other key members of BARP recently held a sitdown with Bexley school officials and school board members to present their demands and make their case for change. The MSP students said the meeting was cordial but that no action has been taken.

Smith, a first-year biology major, said his work with BARP has been an eye-opener in how change is made from the ground up as the group presses officials to make changes.

“It's about actually learning how to hold them accountable and making sure we are not just getting lip service,” he said.

The need for an anti-racism group in Bexley was underscored recently as a group of teenagers were found to be bullying Black students online with racial taunts and slurs. Woodford said media coverage around the online bullying have shattered the “façade” of racial progressivism in Bexley, the traditional home of Columbus' Jewish population.

Smith said he wasn't subject to explicit racial taunting as a Bexley student, but always felt like his skin color was an underlying issue. “I'm not bashing Bexley, I'm grateful for my education and the environment I was in,” Smith said. “But there were definitely micro-aggressions and other small racial incidents that I always had to deal with.”

As the MSP students head back to campus this fall, they hope to apply the valuable lessons they have learned to spark social change on Ohio State's campus. “It's all about continuing the momentum of Black Lives Matter and not letting it die down,” Smith said.

Woodford said this fall will bring together Buckeye activists who have been working for greater racial justice in their own communities. “I think we will hear a lot about issues of racial injustice, inequality and inequity within the university,” she said. “I expect to see that kind of activism from students. I think people will need to continue to evolve and take different shapes in doing this work.”