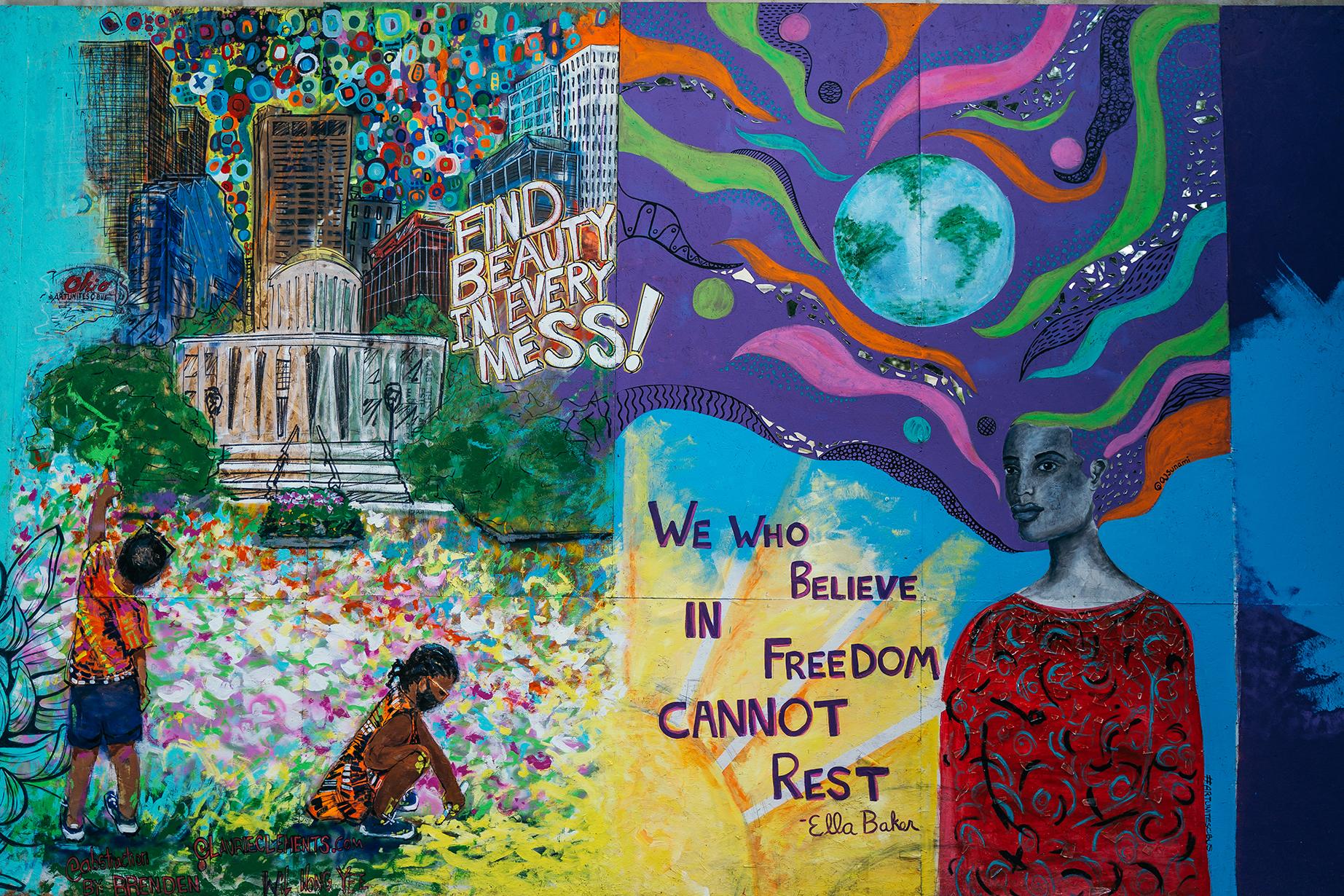 As the boarded up windows began to sprout up lining the streets surrounding the Ohio Statehouse in the aftermath of the initial protests over the death of George Floyd in late May, a fresh canvas was born.

Simple drawings of Floyd and political graffiti that sprung up on the new walls slowly gave way to more elaborate, evocative images as artists who support the protests were tapped for a project launched by the Greater Columbus Arts Council. Among those artists responding to Floyd's death were April Sunami and Stephanie Rond, a pair of Ohio State graduates who make their living as professional artists in Columbus.

A 2002 art history graduate, Sunami said she felt a range of powerful emotions as protests over Floyd's death swept the country. So when the arts council project came calling, she was ready to grab her brushes. “I thought it was an appropriate response,” Sunami said. “These windows get busted out, so you hire artists to give them a voice and a platform on these walls. I thought it was an opportunity for my own form of protest.”

The quick response from artists comes from creating on the “front lines” of culture, according to Sunami. “What we do we are agents of cultural change, we implant these messages and images that eventually change culture,” she said. “It expresses these ideas that we can't do with words.”

For Rond, a 1997 fine arts graduate, the protests tapped into her long-held beliefs for greater equality among all Americans. “This is what we need to be doing, I don't know any other life than to fight for all of us and to fight for equality,” she said. 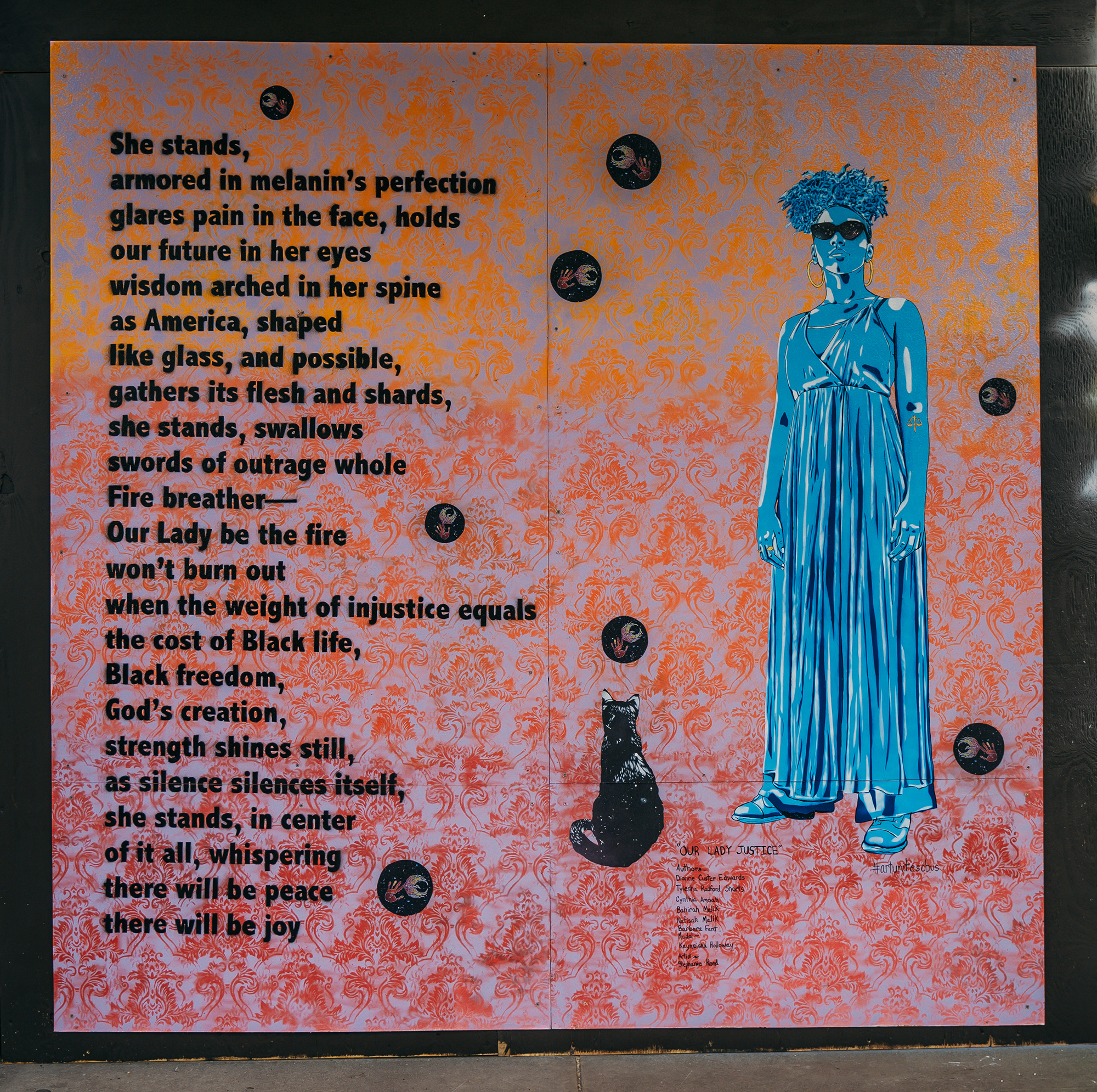 Rond's piece called, “Our Lady Justice,” [image above] features a Black woman in robes with the collaborative lines of a half-dozen contributing poets accompanying it. “Lady Justice was already a figure I had begun back in January before anything happened,” Rond said. “It's just sort of how my brain is working to amplify and create beauty in outdoor spaces with new narratives.”

Most of Sunami's protest art [image at right] features images of Black women in keeping with her larger artistic vision. “My entire body of work is dedicated to 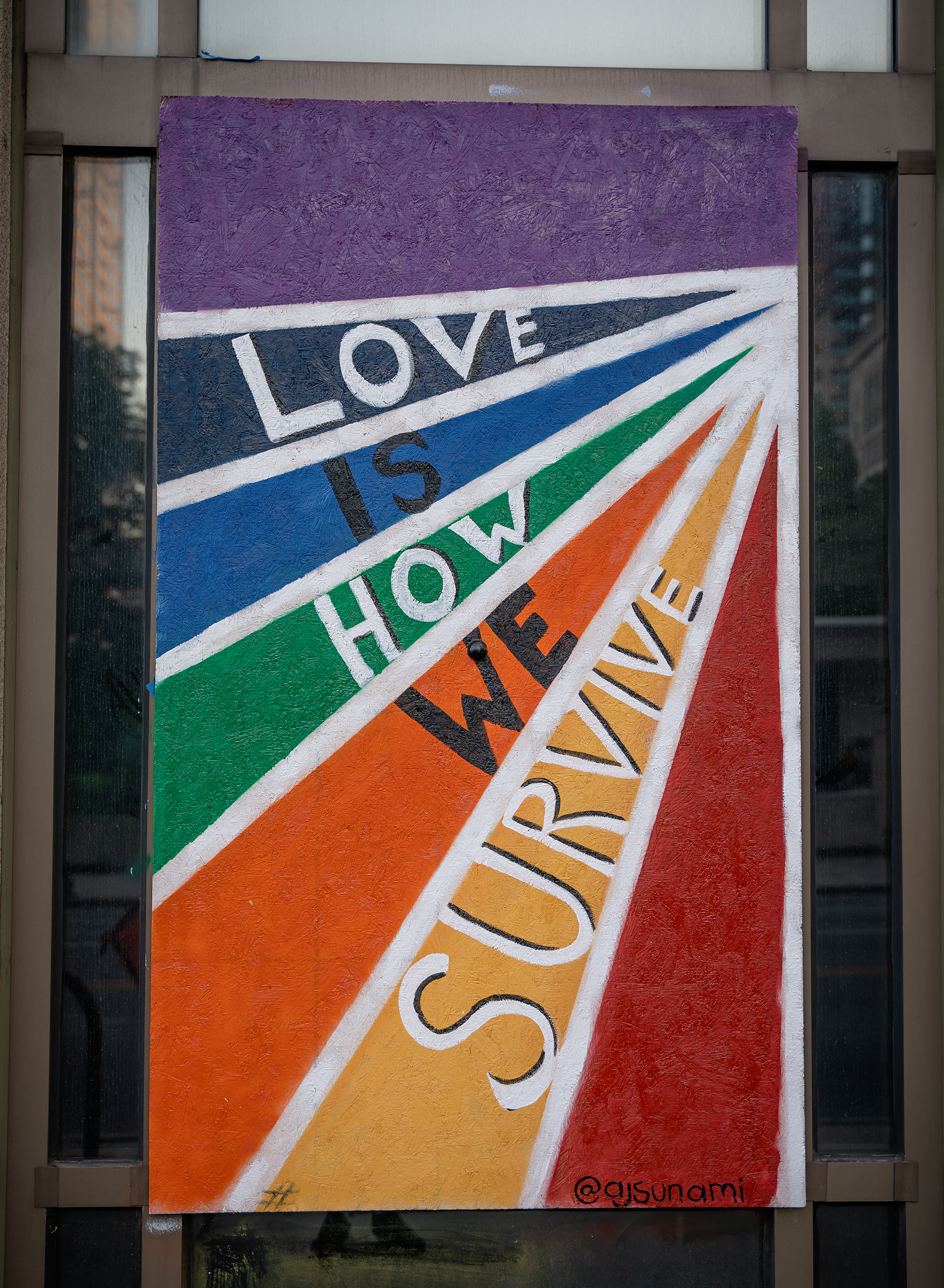 showing the image of Black women in places of privilege like galleries and museums,” she said. “When I studied art history, across the entire canon and the breadth of history, I never saw anybody that looked like me, so as an artist I felt like it was up to me to change that.”

The striking visual art created throughout Columbus became the subject of more than 200 photographs taken by Joshua Edmonds, a visual media specialist with the Office of Diversity and Inclusion. His photographs will be featured in an upcoming virtual exhibit at the King Arts Complex.

A regular participant in the protests, Edmonds was struck by the beauty and breadth of the images being created. “When I saw how far it reached, I said, OK, I have to document this,” he said. “I don't know what is going to happen to some of these pieces…and once they are taken down, they aren't in the same context anymore, which is part of the art.”

Larry Williamson, director of the Hale Black Cultural Center, said art has always played a role in movements for social change. “There has never been a movement in society that art hasn't played a major role in,” he said. “Even when you go back as far as the 1800s, you are going to see similarities with images of chains, fists, hair, certain colors. This is part of the fabric of the movement.”

An art historian, Williamson said the inherent creativity of artists keeps them engaged in movements for social change. “They can visualize what the movement is, and the perception of what can be,” he said. “Art is the reality of what we can make of it.”

For Sunami, the art created in the aftermath of Floyd's death will stand the test of time. “After the dust settles and everyone isn't in the streets anymore, what we will take away is that this is history,” she said. “This is a time capsule of what people were thinking about and what happened here.”