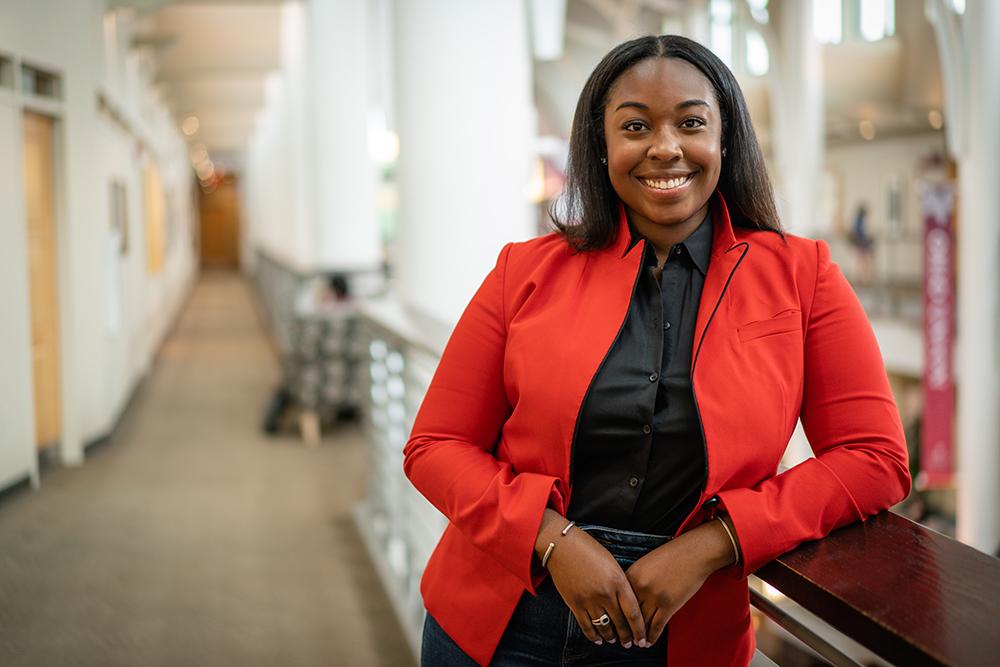 A summer internship helping develop corporate partnerships for the Pittsburgh Penguins has Morrill Scholar Kennedy Wilson dreaming of a time when she'll be a major player in the back offices of pro sports.

“In an ideal world, I could be the head legal counsel of a huge sports organization,” said Wilson, a sociology major with plans to head to law school after graduation this spring. “Or even commissioner of a major sports league. I really liked being on the other side of the sports industry on the back end and seeing how deals are made.”

Wilson recalled her team of interns working with Dunkin Donuts to strike the right chord in a partnership that aligned the company's values of loyalty and family with those of the Pittsburgh hockey team. “The most surprising thing was when you work in partnerships and sales there is so much room for creativity,” she said. “The best partnerships are when you are working toward a common goal that combines values.”

The only Black summer intern among a half dozen working for the Penguins, Wilson said she was surprised at the utter lack of diversity between the blue lines. “Another thing that surprised me is the sheer lack of participation of communities of color in the sport,” she said. “But it was a pleasant surprise that steps are being made to remedy that.”

Among those steps is the Willie O'Ree Academy—a pipeline hockey program for youth of color that Wilson was involved in helping get off the ground floor. Named after the first Black NHL player, the O'Ree Academy involves a nine-week training program and special appearances from NHL players, coaches and executives this summer. “It was kind of a side project that I was able to work with and share some of my ideas,” she said.

Back on campus for her senior year, Wilson is serving as vice-president of the Ohio Union Activities Board, a large student-led organization that plans concerts, speakers, arts events, and other activities across campus. Wilson is planning to focus on membership recruitment and selection, hoping to cast a wider net that draws more interest from a more diverse group of students. “My main goal is to open this space up,” she said. “The only way to change the culture of an organization is to get involved.”

A memorable experience for Wilson was going on ODI's France-Morocco trip in the summer of 2019. “We were in a completely new place with people you don't know, and you come back and you're a family that is learning and exploring new things together,” she said.

A highlight was a visit to several museums in Paris including the world-renowned Louvre Museum. Wilson said the contemporary debate over whether cultural artifacts “collected” by Europeans generations ago should be returned to their owners fascinated her. “The conversation was very much around the stolen art and how a lot of these European museums hold these artifacts that are very meaningful to different tribes and different communities and never asked their permission,” she said. “Looking back on it, the whole trip was an unforgettable experience.”