When it comes to finding educational opportunities, Laila Ujayli's philosophy is quite simple: apply for everything – period.

Laila first applied that philosophy when she applied – and was offered – a Morrill Scholarship at The Ohio State University. The Morrill Scholarship Program (MSP), housed in the Office of Diversity and Inclusion, offers scholarships and educational enrichment opportunities to academically talented students who are actively engaged in diversity-based leadership, service, and social justice. “Ohio State's commitment to bringing diverse voices into the Buckeye community is a great testament to the school's priorities, and those are priorities that I also share, which helped make the decision to attend Ohio State very easy.”

MSP made Laila's undergraduate education affordable and took some pressure off financing the graduate degree that she knew she would one day pursue. Although Laila believes that cost shouldn't be a factor in young people choosing their education, she acknowledges that unfortunately, it is. “When you look far in advance and see that graduate degree, it's scary because people can leave college hundreds of thousands of dollars in debt.” That the Morrill Scholarship program is able to lift that burden for students and allow them to focus on their undergraduate careers is “so valuable.” 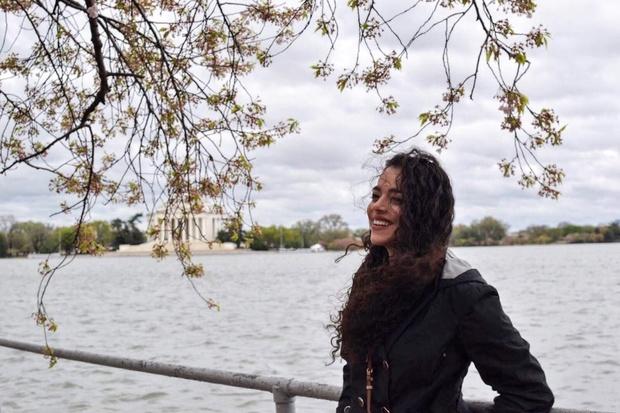 “I heard of the [Scoville] fellowship and thought its list of partnering organizations -- based in D.C. and working in different ways on issues of international peace and security – was incredible.” Laila was awarded the fellowship and ultimately decided to pick Win Without War because its priorities, mission, and values aligned very closely to hers: “Win Without War is all about advocating for a more progressive U.S. foreign policy and democratizing foreign policy. They are breaking down the distinction between foreign and domestic policy by engaging grassroots activists around the country and engaging with policy makers on Capitol Hill.”

That's where representation really matters, Laila continues. “It's not about, ‘Let's add some diversity,' it's about giving people the just representation that they deserve and making sure that our foreign policy and media are a true reflection of the greater United States.”

The Scoville Fellowship also took Laila one step closer to her future goal of wanting to help develop foreign policy that is more centered around the victims of conflict and violence, whether that is by addressing the root causes of forced migration and not exacerbating local drivers of conflicts. These are, Laila states, some issues that Win Without War is tackling.

Before beginning her Scoville Fellowship, Laila considered applying for a Rhodes Scholarship. Founded in 1902, the Rhodes Scholarship was created through the will of Cecil John Rhodes, and those who receive the scholarship are expected to “offer the promise of effective service to the world” and to “play an influential part in the betterment of society.” Rhodes was Prime Minister of the Cape Colony in South Africa and an imperialist. Although Rhodes' will stated that “no student shall be qualified or disqualified for election to a scholarship on account of his race or religious opinions” and one Black American, Alain Locke, received a scholarship in 1907, it wasn't until the 1960s that Black students were regularly awarded scholarships. The first Rhodes class to include women entered Oxford in 1977.

Even though she knew it would be a wonderful educational opportunity, Laila almost didn't apply because she thought it was too much of a long shot. “Being named a Rhodes Scholar seemed like something that would happen to someone else, just out of reach, something that a few impressive people did, because you can't even imagine what it would be like to win it.”

But after listening to her fellowship advisor and looking back on all the past opportunities she had found and taken advantage of, she knew she had to at least apply to become a Rhodes Scholar. Her efforts paid off, and she was awarded a scholarship. She is excited about what lies ahead, especially as a person of color. “Changing how the scholarship once was, working to undo its systems of disempowerment and oppression, and using Rhodes' resources to do it is awesome. The amount of good that some Rhodes Scholars have done is incredible.”

In early January, Laila finished applying to the University of Oxford. Right now, her plan – and Laila admits it might change – is to do two one-year masters programs that pursue the intersection of narrative and foreign policy. “I don't think that [intersection] is looked at enough and [it] is extremely important, so I'm hoping to get one degree in some type of literature and storytelling, and another in foreign policy or forced migration.”

Laila is Ohio State's seventh Rhodes Scholar; the last scholar from the university was Ilhan Dahir in 2015, who was also a Morrill Scholar in the Office of Diversity and Inclusion.