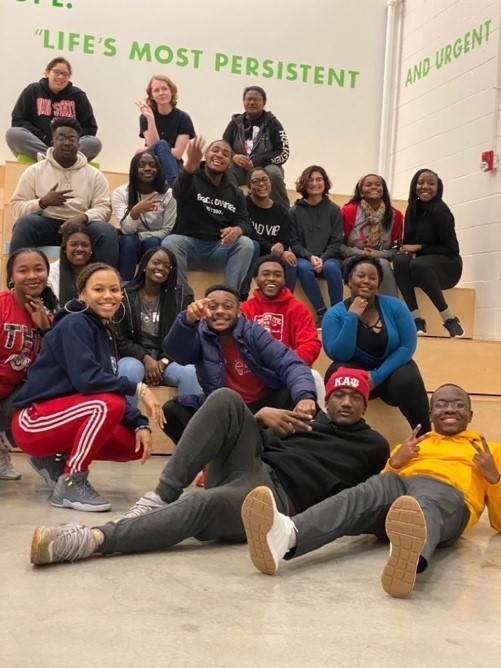 There we met with the Chicago Coalition for the Homeless and learned what to be experiencing homelessness meant to have insecure housing, or housing that wasn't guaranteed for a long period of time. Most often this means people are doubling up, which means living in crowded conditions with family and friends, accounting for 81% of Chicago's homeless population. We also learned that 21% of Chicago's homeless population is employed, showing that wages are not livable (the minimum wage in Chicago in 2019 was $13/hour). Further, 28% of people experiencing homelessness had some college education (associate's or bachelor's degree). Shockingly, we learned the average age for a person experiencing homelessness in the United States is 9 years old, meaning children and minors make up more than half of this group.

On our first day of service, the group headed to support and learn from organizations dedicated to helping people in their community experiencing homelessness. We met Harmony at the Cornerstone Community Outreach Emergency Homeless Shelter. We helped her organize and clean their Free Store on the fifth floor of the shelter where people in the neighborhood could receive donated clothes, shoes, toys, books, and more for free. We were there for hours and, although it seemed to us as if we could have done so much more, our group of 40 students helped with what would have taken Harmony two months to do by herself. Harmony impacted our view on the housing crisis by sharing the roadblocks faced by people at the intersection of experiencing homelessness and substance and mental health disorders. There were no resources in the shelter that addressed these needs, which made finding stable housing difficult, especially when folks could only stay in the shelter for a 120-day period.

The same day we had a panel with The Homebuilders Association of Greater Chicago, which included a discussion with their Public Policy expert, their city lobbyist and a surprise visit from the local Alderman. An Alderman is elected to represent one of the city's fifty wards for a four-year term similar to a City Councilperson. In this strange interaction, we were faced with complications, institutional racism, and veiled messaging. They danced around the issue of housing insecurity and more specifically how so many people of color are impacted by it. One presenter even said, “Let me address the big white elephant in the room: systematic racism,” yet did not actually talk about how systematic racism impacts housing insecurity in Chicago beyond the obvious. Many students felt disheartened by this interaction and feeling like city leaders were not listening to their concerns.

Next, we packaged pears at the Greater Chicago Food Depository. The activity was designed to be fun and competitive with the other volunteer group, but we left concerned about our greater impact. However, as we visited other emergency shelters and food pantries, we found that most had food provided from the depository and even saw our bagged pears once again on the shelves of free grocery stores for local folks to take and enjoy.

We also visited Casa Central, which is specifically geared towards serving the Latinx community in Chicago –– including providing resources for children, the elderly, and includes a homeless shelter a few blocks away. At this site we cleaned the buses that transported the elderly to and from the center each day and disinfected the classrooms for preschool, elementary, and middle school-aged children used for after-school enrichment. There we met Andy, who spoke passionately about their work and showed us the impact our collective service has on the local community.

Finally, one of the most impactful experiences was meeting members of the Chicago Coalition for the Homeless, many of whom are people who have formerly experienced homelessness. We heard from their grassroots leaders about their unique experiences, which made it clear how easy it is for someone to become impacted by housing insecurity. They shared that many people are one missed paycheck, accident, or unforeseen medical bill away from being unstably housed. After talking with the coalition, we helped them pass out flyers to those in one of Chicago's Westside neighborhoods in hopes of connecting the community to important information and resources. It was an inspiring experience, and the passion of everyone in their organization was clearly felt.

Every person we met helped shape our view on the housing crisis in Chicago –– whether they helped a lot or a little. By their actions, we were able to determine who was actually committed to serving those in need. We were also able to see whose lead we should follow to fight the issue of housing insecurity and the lack of affordable housing in our own cities and communities. In the end, we learned what many of us already know: those experiencing the issue are best suited to address it.

Nalijah Daniels is a First-Year from Norman, Oklahoma (Boomer Sooner!) majoring in English with a creative writing track. When she's not doing homework, she enjoys listening to music, hanging out with friends, watching Netflix or YouTube, and doing TikTok dances.