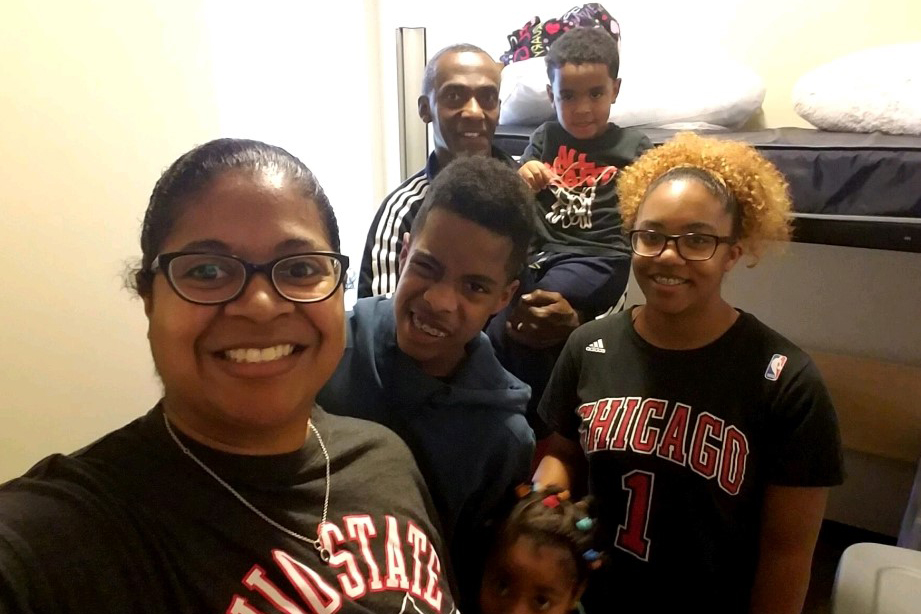 In 2002, as a first-generation college student from a low-income family in Kalamazoo, Michigan, Monica R. Liggins-Abrams applied to The Ohio State University. While in high school, she had spent time in Columbus and attended a summer enrichment program through the African-American and African Studies Extension Center. It was a one week residential program that introduced her to Ohio State.

After applying to Ohio State and being accepted, Monica was offered the chance for a special visit to the campus for out-of-state students to learn more about the Morrill Scholarship Program (MSP), run by the Office of Diversity and Inclusion (ODI).

Monica found the campus to be “amazing,” and everyone she came in contact with was very welcoming: “I felt at home.” During the visit, Monica also met other minority students from all over the country. “I kept in touch with another student, and we were roommates my freshmen year. She is still one of my lifelong and closest friends to this day.” Monica was offered a scholarship to offset her out-of-state tuition costs through MSP and received the scholarship all four years she attended Ohio State.

MSP helped Monica have the independence she wanted while minimizing the number of student loans she had. “As a first-generation college student from a low-income family, my parents did not have the financial resources to support me pretty much at all while I was in college. My oldest brother and other extended family members helped, but I wanted to do it on my own.”

While a sophomore in college, Monica became pregnant, and she was adamant that she was going to stay in school and not return to Michigan. Her academic advisor told her about the ACCESS Collaborative Program – another initiative within ODI – and Monica signed up when pregnant with her oldest son.

First to admit that the appeal of the ACCESS program was receiving priority registration, Monica stated, “I was not much interested in the community/family that program offered because I was a bit of a loaner and had a group of close and supportive friends.”

But what Monica received from ACCESS was so much more than she expected. Without ACCESS, she says, she does not believe she would have finished her undergraduate degree, let alone in four years. The events that impacted her the most were the life/group counseling sessions lead by two women who came in from the community to work with ACCESS students. “They created a safe space for us.”

There were many things about being a parent – and a single parent – that Monica says she was not ready to handle as a twenty-year-old. “The life coaches supported us through our big and small life challenges brought on not only by being a parent, but a single parent and full-time student. They helped us celebrate our successes but also provided a space where we could release and cry if needed about the stresses we faced on a daily basis.” The life lessons learned from those meetings gave Monica the coping skills and tools needed to overcome non-academic barriers that could have prevented her from persisting with her education.

Once she graduated from Ohio State with a BA in Political Science, Monica went on to receive a Master of Public Administration from Walden University. Her experiences as a Morrill Scholar and in ACCESS have helped her in her current position as director of Success at WMU (Western Michigan University).

Those lessons learned during her time at Ohio State remind Monica to think about the unique needs of the students she serves: “Every student that steps foot on a college campus is unique. The formula for them to feel connected and engaged will be different. Programs like ACCESS, MSP and Success at WMU not only provide information and resources, they can help students feel like they belong in college. Finding fit for all students is critical. These programs give you a mechanism for doing that. By removing non-academic barriers for students, you give them the opportunity to blossom and reach their highest potential.”

Another source of inspiration for Monica has been her family. While at Ohio State, Monica says her oldest son was her inspiration because she wanted to be good parent to him. “Part of being a good parent in my eyes was earning a decent living to care for him and me. Completing my degree at OSU provided me an avenue to do that.” And Monica has always drawn inspiration from her immediate and extended family. Despite being a first-generation college student, Monica's family has always placed a strong emphasis on education. “They provided me with a strong foundation and have always supported me to pursue my education. Many family members have faced life challenges through the years, but despite that, they faced them with grace, and their strength and resiliency keeps me motivated.”

Currently, Monica is working on her PhD in Educational Leadership from Western Michigan University, which she expects to receive in 2022. Her family helps to maintain her focus between work and school. “I often say “we” are getting a PhD because without them I would not be able to pursue my education and professional goals in the manner I am now.”

Her advice for upcoming Buckeyes who are heading to college for the first time? Take advantage of every opportunity to make your experience in college a fulfilling one. It is easy to fall into a routine, go to classes and just get by, Monica states. But students need to remember that higher education provides them with a unique opportunity to meet new people, explore their identities, engage in new cultural experiences, build professional skills, network and just have fun.