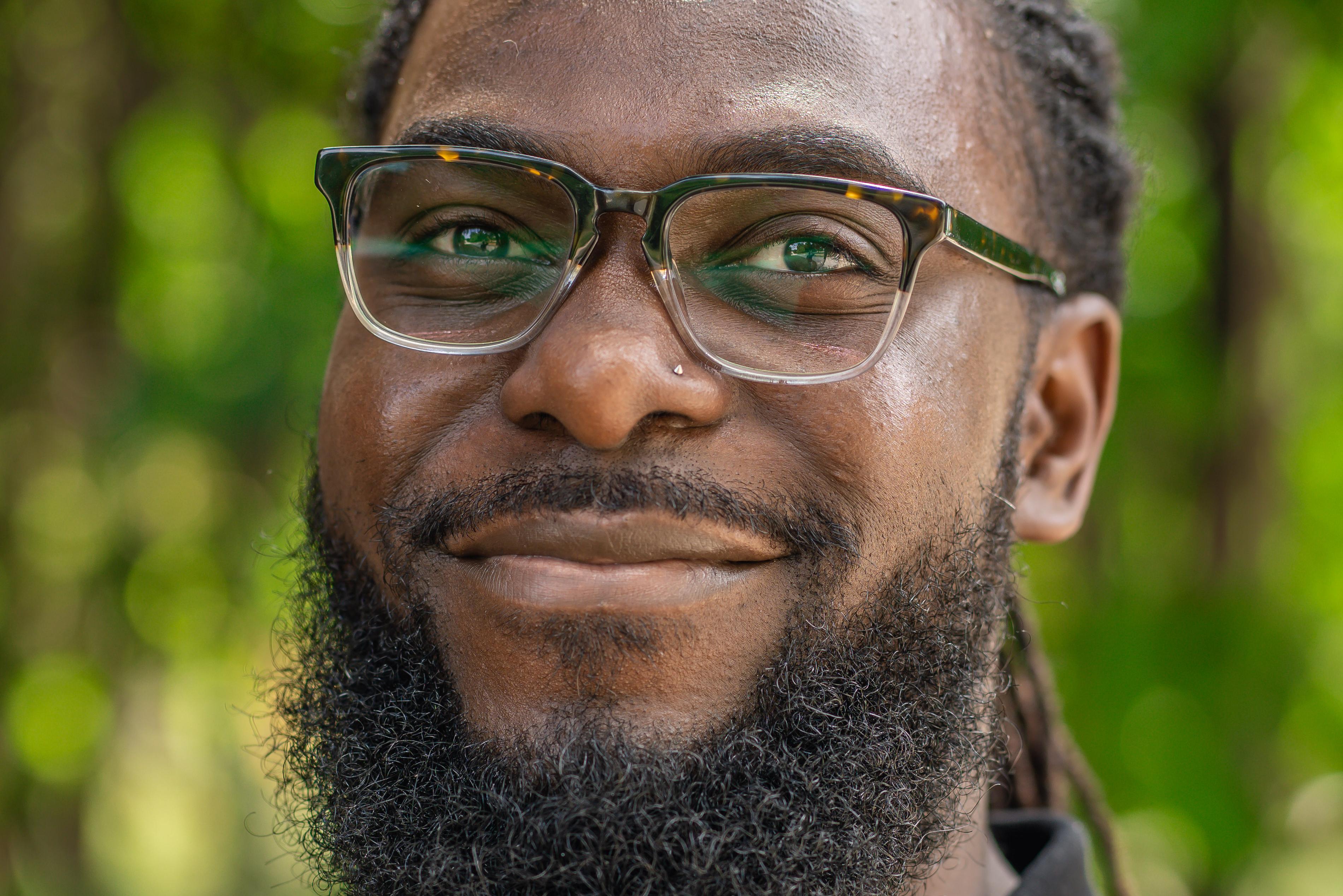 Just think of a ball of yarn, Peter Oduwole, the embedded therapist for the Office of Diversity and Inclusion, tells his patients. Pull on a thread on that ball of yarn, and as it slowly unravels you see how the pieces connect, Oduwole explains. “That's all therapy is,” he says. “They just have to give me the ball of yarn first.”

Coaxing ODI students into giving him a thread to pull on and explaining how therapy benefits them is all in a day's work for ODI's resident mental health counselor. Due to the Covid-19 crisis, Oduwole is using teletherapy to sees dozens of patients in individual sessions and has combined forces with his counseling colleagues to offer daily informal “Let's Talk” drop-in remote sessions.

A University of Dayton graduate in clinical mental health counseling, Oduwole said his goal is to get his clients reflecting on their thought patterns as they work together confronting coming-of-age issues like anxiety, identity and childhood trauma. “It's really trying to encourage people to think critically about the decisions that they make and the things they are passionate about,” he says.

After a semester on the job, we caught up with Peter to ask why he likes working with young people, the common misconceptions that ODI students have about therapy, and how the current health crisis is impacting young people's mental health.

You come from a job working as a counselor at Kenyon College. How did that help prepare you for your work at ODI?

“Kenyon's demographic differs a bit from Ohio State in multiple ways which allowed me to challenge my own biases about how privilege interacts with mental health. Life doesn't discriminate. To be able to work with that population was super insightful, and now with my work at ODI, I feel like I have a broader perspective having once served that population.”

What do you enjoy about working with young people in a college setting?

“There is something that is incredibly refreshing and hope-instilling about working with younger people who are trying to unlearn and relearn self-compassion and having compassion for others and just healthy ways of being. It's what I really needed in my career.”

You've been here since August; what kinds of issues are you helping ODI students with?

“I definitely see a lot of loneliness and anxiety. People come in with different experiences, but often they feel like they are not fitting in here. A lot of my clients are people of color and feel like outsiders in a place where they belong. I also encounter a lot of trauma, people who are coming from really difficult situations. They are coming into college having learned how to be people from folks who have also been hurt by life in many ways.”

This health crisis has caused everyone to be fearful of the possible impact on our health and the health of our loved ones. How are the ODI students you work with being impacted and responding to these unprecedented circumstances

“This pandemic has exacerbated what was already an unsustainable landscape for mentally and emotionally well people. It has highlighted how many protocol and practices are not providing order for society, but barriers for access. Marginalized people are feeling this the most at this time, many of whom are ODI students. Something I, along with my CCS colleagues are prioritizing at this time is making sure that people's basic needs are being met: housing, food, physical safety etc. We're all in survival mode right now and will be for a while. My hope is that when this is over, society doesn't return to the normal that we knew, because that wasn't working for too many of us.”

The Internet and social media have reshaped our culture. How do you think it's impacting your clients?

“Having constant access to news stories of really traumatic stuff happening all the time impacts this generation differently than others. Because there seems to be no break from it. There's always something to feel like there's no guarantee “I'll be safe as I pursue my own goals.” So trying to relearn that there is control we have over our immediate present is something we work on a lot.”

An Ohio State basketball player recently left the team for mental health reasons, an unprecedented announcement. Do you think our societal attitudes are changing toward those struggling with mental health issues?

“I think there are so many conversations that we can have in a sensitive and respectful and honest way. There is an accountability that people are taking for their own wellbeing. It sounds like this player has done that and that is super brave to do at a place like OSU when you're under the spotlight as an athlete. Taking a step like that for yourself is an investment in yourself.”

You are your colleagues hold daily, informal sessions called Let's Talk, where anyone can just drop by for a teletherapy chat in the afternoon. What are those times like?

“We'll talk with a person for about 15-20 minutes and talk about whatever concerns they have and then do some problems solving in that moment. We'll think about what campus resources could help address their concerns, or we'll get them primed if they are going down the road of longer-term therapy. It's really more of a problem-solving session then it is a counseling session.”

What do you think the common misconceptions that ODI students have about therapy?

“I think people think it's a white thing. That only white people are depressed and anxious and that therapy is only something they can do. I think male-identifying people still connect their masculinity to being mentally strong and see counseling as something that conflicts with that. It's much less in this younger generation, but it still exists because they grew up in a world that prioritizes maleness and straightness and all those kinds of things.”