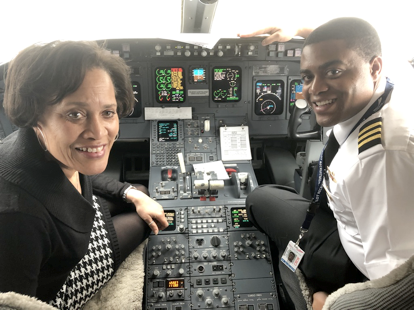 From a very young age Mark Reese knew he wanted to be a pilot. But he also knew that the process of actualizing this dream would require many years and stages. A recipient of ODI's Morrill Scholarship who studied Aviation during his time as an undergraduate student at The Ohio State University, Mark is now a First Officer (the pilot designated as second-in-command to an aircraft's captain—though responsibilities are normally shared).

Currently based out of New York City, Mark pilots the CRJ-200, a civil jet airliner which holds around 50 passengers. But before Mark could be certified as a First Officer, he had to complete a rigorous three-month training program at Endeavor Air (a subsidiary of Delta Airlines) which contained, as he remembers, “a gauntlet of exams and proficiency checks.” This included written, flight, and oral exams on top of 40-50 hours in a flight simulator. “The toughest part was definitely pacing myself,” he said. “There was new material each day, and at first I wanted to study from the time class ended until midnight, but it affected me the next day in class when I was tired and not retaining the new information. I learned to treat the process as a marathon and only study four hours a night to keep fresh.” Mark also realized that an essential aspect of the training process was maintaining humility while learning. “All pilots want to fly the perfect maneuver or have a great landing each time, but as I was getting comfortable in the plane, I had to be patient and know that mastery would come.”

And come it did, as Mark stepped into his first flight with confidence, transferring his simulator experience (and boyhood dream) into a reality. “The most rewarding part of the process was my first flight and getting to talk over the PA system and say, ‘Hello from the Flight Deck…'”

Mark's first flight, though relatively tame, was preceded by a mix of elation and nervousness. He affirms that his hours spent in the simulator culminated in the actual flight feeling like second nature. “The plane handles slightly differently than the simulator, but I was well prepared and my first takeoff was awesome,” he recalls. “There was so much power in the engines and as soon as I lifted off, I knew I had accomplished a lifelong dream. It was also helpful knowing that my mom was onboard my first flight, so I knew I had her support the whole time.”

Currently, Mark is in the process of completing his relocation to Queens, New York and adjusting to his new schedule. Having grown up in Golden, Colorado, he said that he enjoys the melting pot of cultures he now encounters daily. “Colorado was not very diverse, and it is refreshing to see everyone living and working together,” Reese says.

Now that he has experienced both commercial and private flights, Mark says that he definitely prefers commercial airlines seeing as how private operator schedules are notoriously grueling. He once worked eight days in a row away from home. “As a private pilot with private clients, we did go to a lot of cool places, and I actually got to land at a private beach club in Florida and did a lot of Bahamas flying, so I will miss that.” Reese notes that he also flew to the “private island owned by Pablo Escobar” mentioned in the Netflix documentary FYRE (about the botched Fyre Festival).

But ultimately Mark finds the commercial schedule (3-4 days away and 3-4 days at home) much more manageable. “I also enjoy commercial aviation because my parents and my girlfriend all fly for free, so vacations and holidays are much cheaper.”

Mark admits that attaining his childhood dream did not come without hardships, and he echoes a sentiment often expressed by African-Americans who excel in fields in which they are a rarity. “The major challenges I have faced are definitely those related to access and education,” he recalls. “I applied for about 40 scholarships to fund my aviation dreams, and there were snide comments made by peers when I would win them (‘only won because he's Black' and things of that nature). Also, aviation carries about a $50,000 extra bill on top of tuition for flight training, so it is hard for most people to afford the program, let alone Black Americans with less generational wealth.” Reese also volunteers with organizations that work to provide scholarships and free flights, but he knows that much more needs to be done to make aviation an accessible career for young African-Americans.

Though Mark is only one year into his dream career and gaining experience, he does hope to eventually engage in large-scale international flights with a major airline in the future. Yet he acknowledges, once again, that patience is a definite prerequisite. “You generally have to have 10 – 15 years with the company before you can go to Europe/Asia/South America/Africa/Australia.” But given Mark Reese's ambition and focus, any accomplishments in aviation seem attainable in the long run.