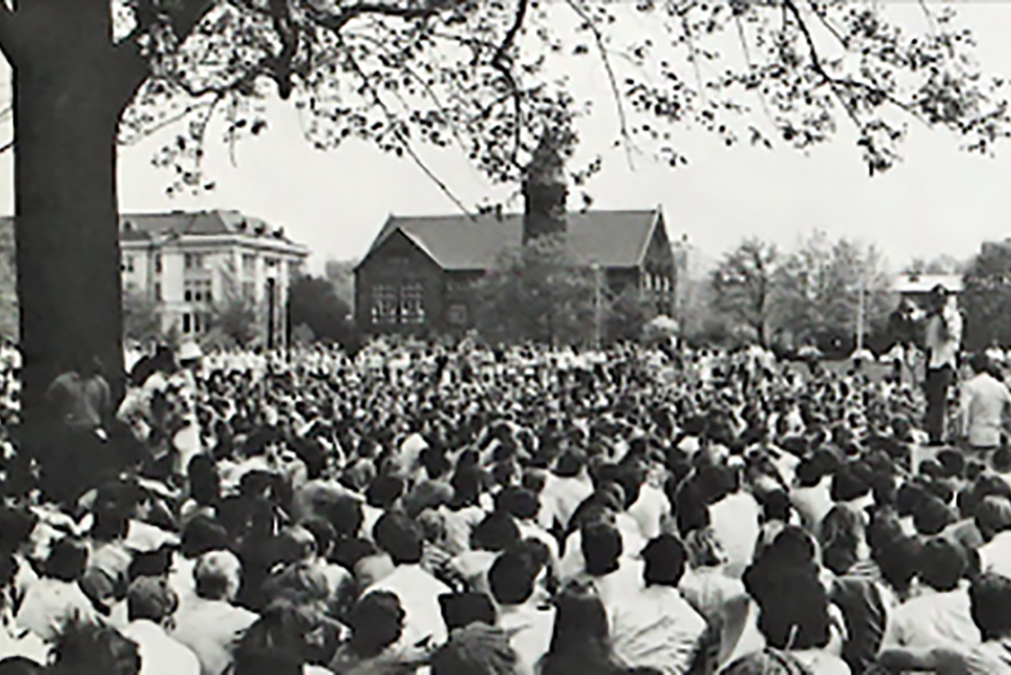 As The Ohio State University celebrates 150 years, both students and faculty are looking back at the historic moments that have shaped our institution. In 1878, the school graduated a class of just six men and, after some protest, the first woman a year later. Over the years, the university expanded its reach, accepting more students and increasing the number of buildings to accommodate the growing student body. Today, the university boasts a commitment to diversity through admissions and the creation of new programs to help students of color.

According to the paper “A Ruckus on High Street,” co-authored by Ohio State professor Judson L. Jeffries, the university has had a long history of Black students influencing campus, with the first Black student graduating in 1888. Nevertheless, Black students who attended in the early- to mid-20th century did not find campus very hospitable.

One former student remembers that when she attended in the 1940s, she didn't see, “more than 100 Black students on campus,” and the Psych department made it clear they did not want a Black student in their program. In addition, some Black students found the curriculum to be culturally insensitive and Eurocentric.

By the 1950s, the university finally permitted Black students to live on campus. Now on campus, Black students began organizing and speaking out against racist school policies much as they had done to desegregate campus housing. Motivated by the Civil Rights and Black Power movements, Black student organizations including the Black Student Union and the Afro-American Association were created. By 1970, with the help of the newly-formed Committee of Afro-American Studies (CAAS), students demanded a Black Studies program at Ohio State, an Office of Minority Affairs, a Black Studies Library, and financial aid for Black students.

Inevitably, these efforts faced backlash. The racism on campus continued with some students finding “KKK” engraved on their residence hall doors, a reference to the white supremacist group the Ku Klux Klan. When these concerns were dismissed by the administration, Black students escalated their efforts, staging protests and continuing to vocalize their concerns. Two instances in particular finally made Ohio State's administrators realize they had to take the students' demands seriously.

When several Black women who were Ohio State students were kicked off a university bus for what the driver reported as discussing “Blackness,” Black students attempted to file a complaint but received harassment from campus police. The story made nightly news and tensions heightened considerably.

Lorraine Cohen, who later became a high-profile leader herself, remembers when she arrived on campus in 1968, “throngs of students were protesting.” Black students felt attacked and began mass protests of racism on campus. Some students did not protest for fear of losing their funding and being forced to leave the university.

Things came to head when a 1968 sit-in saw the arrest of 34 Black students. The unfair arrest of the OSU 34, as they would come to be called, led to university officials taking the first steps to taking tangible steps in addressing Black students' concerns, beginning with hiring new Black faculty. Despite these wins for Black students on campus, the arrests had weakened the Black Student Union (BSU), and the administrators still had not agreed to the student demand of creating a Department of Black Studies.

Protests broke out again. This time, things escalated to the point that the National Guard was brought in, forcing the university to completely shut down. Out of this event, Black and white students created a coalition, which expedited the university's decision to finally add a Black Studies Program.

Although the creation of the program itself was contentious, it was what happened shortly after the program was in place that will infamously go down in Ohio State history. With the BSU weakened, the Afro-American Association (AAA) was the leading organization on campus pushing for Black student rights. The AAA believed the university was not protecting the emotional and physical needs of Black students, and even more demonstrations were staged. The university called in the State Highway Patrol and the Columbus Police Department, which used low-flying helicopters to intimidate the crowds of Black students and their allies.

Tensions only escalated when a student strike was held on April 29, 1970 that lasted until May 6, 1970. During that time, the university was functionally shut down and no one was allowed to attend class.

By 1972, however, the Black Studies program had departmental status and capable faculty to oversee its growth. In 1974, Ohio State became one of the first universities in the nation to offer a graduate degree in Black Studies.

Elsewhere on campus, more good change was happening. In 1972, the Black Studies Department's Community Extension Center was established. The CEC was created as a way for Ohio State to engage and benefit the local community, offering educational and career opportunities to those living in the historically-Black, Near East Side of Columbus. The Center is still in operation to this day.

The Office of Diversity and Inclusion was also a product of Black student-led protest. Formed in 1970, and first referred to as the “Office of Minority Affairs,” ODI has expanded to offer countless services, education opportunities, and scholarships to a diverse student body.

Ohio State University's history is incomplete without acknowledging the legacy of Black students on campus. There's no telling what will happen in the next 150 years, but today we can thank past students whose efforts helped ensure the right to a fair and complete education at Ohio State.

Sarah Stouffer-Lerch is a First-Year student double-majored in Public Policy and Hospitality Management. Her interests lie in event planning and using storytelling as a means to achieve understanding, particularly in the realm of public affairs. In addition to writing for the MSP Newsletter, she is also a member of the Journal of Undergraduate Research and the Hospitality Management Association.