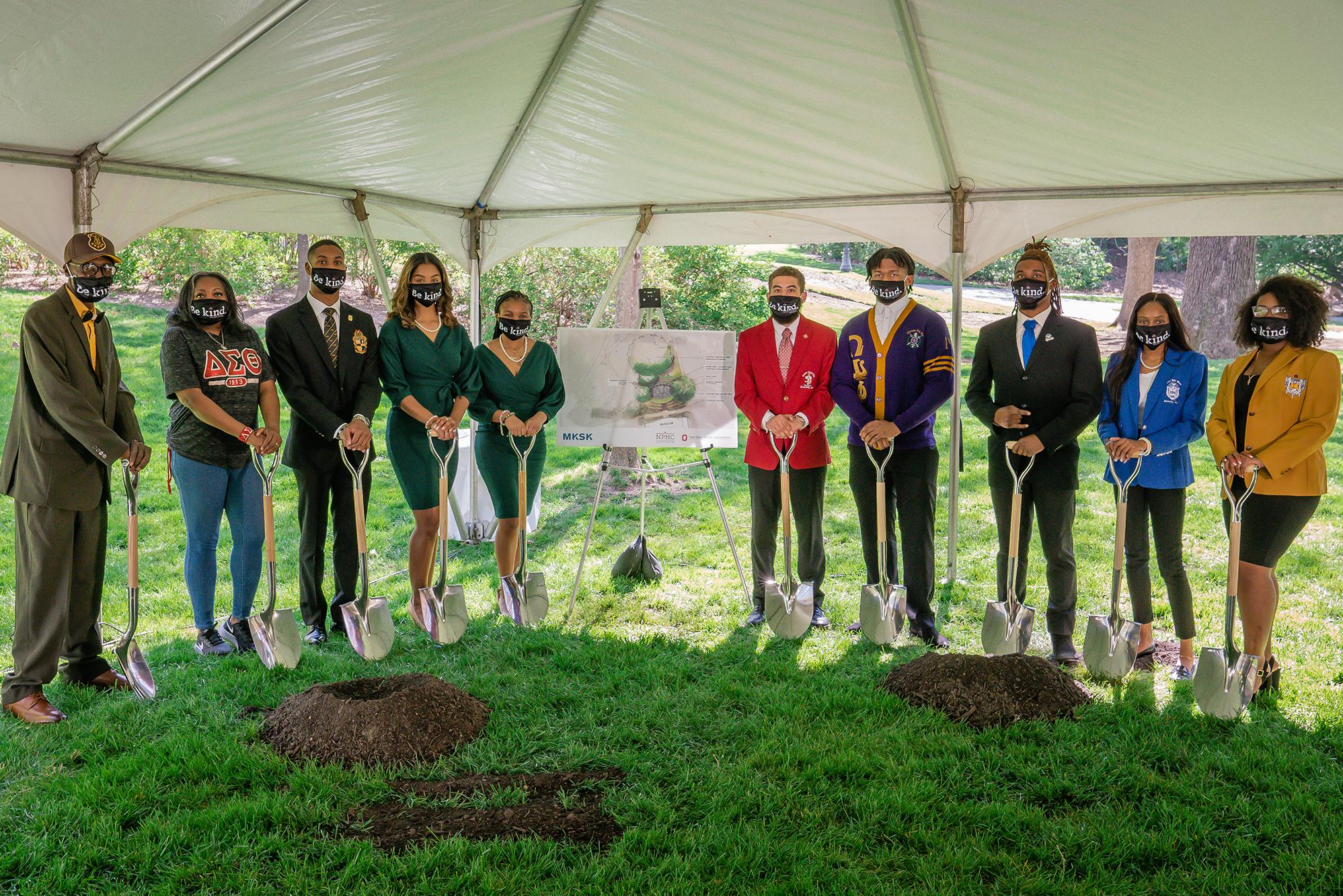 At long last—a place of their own.

For the Black Greek organizations known as “The Divine Nine,” Tuesday's groundbreaking on the National Pan-Hellenic Council (NPHC) Plaza was the realization of a long-held dream.

As far back as the 1970s, students involved in Black Greek life at The Ohio State University were advocating for some kind of a gathering space for programing and special events, said Rayonna Booth, a member of Zeta Phi Beta who was instrumental in planning the project.

“It is up to the Black students to find a home here, and the plaza will be just that,” said Booth during a virtual ceremony for the groundbreaking streamed publicly on Tuesday afternoon.

While most of the ceremony was virtual, an actual groundbreaking did take place as a half-dozen representatives of NPHC organizations touched silver ceremonial spades to dirt under a white tent and sunny skies.

Once completed, the NPHC Plaza will feature a monument to the Black Greek organizations at Ohio State and serve as a meeting space as well as a gathering spot for events related to Black Greek life. Dr. Melissa Shivers, senior vice-president for student life, participated in the ceremony for the event calling the plaza “a symbol of welcome, hope and pride.”

Larry Williamson Jr., the director of the Frank W. Hale Black Cultural Center, said it was fitting that the plaza will lie just north of Hale Hall along an Underground Railroad route “where slavery turned into bravery.”

Current NPHC vice-president Devon Stith said the plaza will honor the historic legacy of Ohio State's Black Greek organizations while “setting the stage for a new generation of growth and visibility.”

Dr. James L. Moore III, the vice provost for diversity and inclusion and chief diversity officer at the university, said "Today, we dig deep to mark the beginning of the NPHC Plaza, a new campus icon sure to take its place alongside the great landmarks of The Ohio State University like Ohio Stadium, the Oval and Hale Hall.”

Added Moore: “This plaza will represent a wonderful tribute to the ongoing vitality and influence of “The Divine Nine” on Buckeye student life. We hope, in the very near future, that a renovated and expanded Hale Hall will follow, and it surely will complement the new NPHC Plaza."