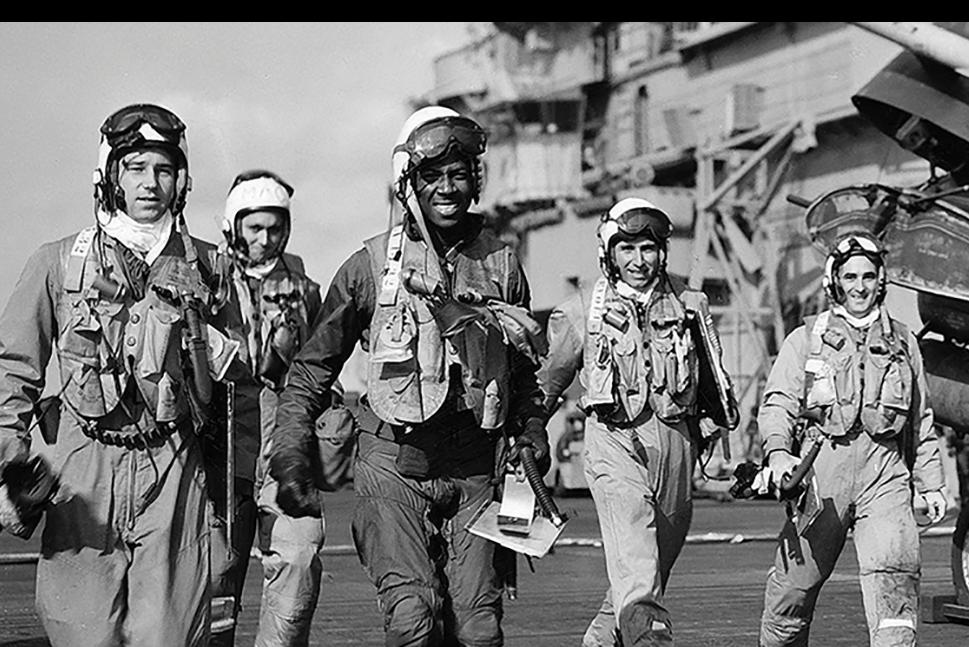 The aviation world had landed at Ohio State this morning for the 4th Annual Global Conference on Diversity in Aviation, Aerospace and STEM at The Blackwell.

In honor of the conference, we are featuring the story of Jesse L. Brown, a Buckeye student and Korean War hero whose dramatic death in combat is currently being made into a major motion picture. Celebrated by the U.S. Navy as the first Black Naval aviator, Brown came to Ohio State to follow in the footsteps of his hero, Jesse Owens.

As the plane appeared low in the sky over the Mississippi cotton field, the farmhands laboring in the fields sprinted for the cover of a clump of oak trees. When the pilot dipped to treetop height to buzz the sharecroppers, young Jesse Brown stood his ground.

“Everybody else would run and try to find a tree to hide behind. And Jesse would just sit up there—like he was crazy talking about how he was going to do that someday. And everybody knew he must be crazy because that was a time before the Tuskegee Airmen,” recalled his brother, Fletcher Brown, in a 2008 documentary produced by the University of Central Florida. “But that's what he wanted to do—fly airplanes.”

Brown's airborne dreams would propel him from the cotton fields of Mississippi to The Ohio State University and eventually to a tragic ending on a remote, snowy mountaintop in North Korea as a naval aviator. It would also serve as the backdrop for an incredible story of heroism, friendship, sacrifice and devotion that is being made into a major motion picture, decades after the tragedy. “There's no better example of brotherhood, white or Black, than what happened that terrible afternoon at Somong-ni,” said Brown's widow, Daisy Browne Throne, in the 2008 documentary.

After a childhood spent working the fields of Mississippi, Brown arrived at Ohio State when he took the unusual step of enrolling in a northern, predominantly white institution after graduating as salutatorian of his segregated high school in Hattiesburg, Mississippi in 1944. A whip-smart young man of Black, Chickasaw and Choctaw heritage, Brown wished to follow in the footsteps of his hero—Jesse Owens—who had attended Ohio State before stunning the world with a four gold medal performance at the 1936 Olympic Games in Berlin.

While studying architectural engineering at the university, Brown worked unloading engine parts from railroad boxcars for 83 cents an hour, often working a full shift that ended at midnight. He wrote long letters to his high school sweetheart, Daisy, promising to stay devoted to her and their infant daughter. “He was a determined person. The odds of him being able to go to Ohio State—his father never gave him a penny to help him go to school,” Brown Throne recalled. “He didn't mind getting out there working, he knew he wanted to be an architect.”

But Brown also still harbored childhood dreams of becoming a pilot. After visiting the head of the university's aviation program, he was told there was simply no place for a Black man in the program other than as a mechanic. Spotting a flyer on campus for the V-5 Aviation Cadet Training Program being conducted by the U.S. Navy to commission naval aviation pilots, Brown passed the entrance exams after several tries and was admitted into the Naval Reserve in 1946. At the time, he was one of only 14 out of 5,600 Naval ROTC members to be Black.

Earning his pilot wings in October 1948 amid a flurry of press coverage, Brown was heralded for breaking the color barrier for naval aviators. While Brown has long been credited by the U.S. Navy as the first Black naval aviator, research from a historian at the Naval Historical Center suggests that Oscar Holmes—a 1939 Ohio State graduate coincidentally—preceded Brown as the country's first Black naval aviator. Nonetheless, Brown was undoubtedly a trailblazer—the first Black navy aviator to complete basic flight training, fly combat missions, and land on the deck of an aircraft carrier. 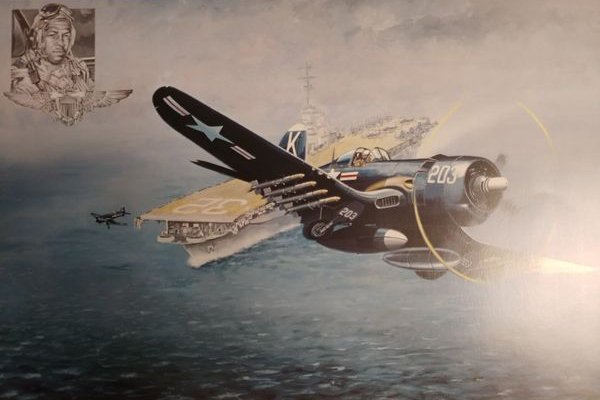 Assigned to Fighter Squadron 32 aboard the aircraft carrier USS Leyte, Brown's unit was ordered to the Korean Peninsula to support ground troops at the Battle of Chosin Reservoir.

After flying 20 combat missions in his Navy Corsair aircraft supporting outnumbered American forces, Brown came under fire and crashed on a remote mountaintop on December 4, 1950.

Partly shrouded in a halo of smoke, Brown was seen waving from his downed plane by his wingman Thomas J. Hudner Jr. and the other Corsair pilots, according to the book Devotion by Adam Makos. Ignoring express orders from the ship's commander, Hudner purposefully crash-landed his plane into the mountain slope, coming to rest only about 50 yards from Brown's still smoldering plane.

With Brown pinned in the wreckage by a crushed instrument panel lodged against his right knee, Hudner tried to pull his friend from the debris. With enemy soldiers closing in and the nightfall rapidly approaching with subzero temperatures, Hudner was in a race against time to free Brown.

With an ax brought by a helicopter rescue pilot, Hudner attempted to cut Brown from the wreckage as his friend lapsed in and out of consciousness. Brown's final words: “Tell Daisy how much I love her.”

After working for 45 minutes, the pair were unable to free Brown and with Chinese troops drawing close, Hudner and the rescue helicopter pilot were forced to retreat leaving Brown behind. The next day, four planes from Brown's old squadron departed the USS Leyte. As one of the pilots recited the Lord's prayer over the squadron's radio channel, napalm was dropped incinerating what was left of Brown's plane.

For “conspicuous gallantry and intrepidity at the risk of his life” in trying to rescue Brown, Hudner was given the Medal of Honor, the nation highest and most-prestigious military award. Meanwhile, Brown was posthumously awarded the Distinguished Flying Cross and Purple Heart and was the first Black naval officer to have a Naval Frigate named after him when the USS Jesse Brown was commissioned in 1973. (His widow, Daisy, ceremoniously welded the first piece of steel put in the ship.)

In his final letter to Daisy—written the night before his tragic death—Brown stressed the importance of the air support missions he was participating in. “Knowing that he's helping those poor guys on the ground, I think every pilot on here would fly until he dropped in his tracks,” he wrote.

In 2021, filming of a major motion picture about the dramatic events of Brown's death in combat began in Savannah, Charleston S.C. and central Washington State. No release date has been announced for the epic $90 million drama, which stars Jonathan Majors as Brown and will be distributed by Sony Pictures.

Brown's daughter, Pamela Knight, told USA Today News that Brown never intended to be a hero. “He didn't set out to be a hero, but that's what he was in that he had the fortitude to go out and do what he wanted to do and didn't let anything stop him,” she said. “I want other people to understand, especially young African American men, if you have a dream, don't let anyone stop you. He didn't let anyone stop him.”